The films of Joel and Ethan Coen are always a treat to watch. One reason I love them so much is that they are simultaneously an homage to a genre, a parody, and a rightful addition to that genre, as well. Take, for instance, Miller’s Crossing (1991), one of their early films, which portrays a prohibition era fight between two crime bosses, Leo (Albert Finney) and Johnny Casper (Jon Polito). The story’s central character is Tom Reagan (Gabriel Bryne), who’s loyal to Leo, his long time partner in crime in the Irish mob. But Leo and Tom are both in love with the same woman, Verna (Marcia Gay Harden). This romantic conflict leads exactly in the direction you might think, and this love triangle complicates Leo and Tom’s business partnership and friendship.

Throughout the whole film it’s not clear who’s side Tom is on: Leo’s, Johnny’s, or maybe just his own. He’s playing all sides. He knows more than everyone, and he works in the shadows. The film is a gangster film, but it’s also a detective film; it’s a film noir, a drama, an action film, and a comedy. It parodies films, honors them, and adds to the film noir corpus in its own right. The film follows and inverts traditions. Is Miller’s Crossing critiquing the film noir, honoring it, parodying it, or something else? The truth is it’s doing all these things simultaneously.  Many of their other films do this too: The Big Lewbowski (1998) with film noir, True Grit (2010) with the Western, and The Hudsucker Proxy (1994) with screwball comedies.

All this came to mind when I re-watched Shrek (2001), an animated film produced and distributed by DreamWorks. This film centers around the rescue of Princess Fiona (Cameron Diaz) by Shrek (Mike Myers), an Ogre, and his newfound friend Donkey (Eddie Murphy). As many have mentioned, the film invokes fairy tales, and does so with wild abandon. But it’s depiction of these tales consistently suggests that our understanding of them misses the mark.

These fairy tales portray these characters in stable, immutable forms: the dragon is always evil and mean, the ogre always scary and tough, Prince charming is always handsome and brave, and the Princess is fair and true. But we all know that that’s not the way real life works. Real life is messy, complicated, and people’s stories cannot be simply told. One contribution Shrek makes to our understanding both of life and storytelling is that fairy tales are complicated, too. In this film, the dragon (Gary A. Hecker) is lonely, the orge is nice, the ass (donkey) is the most emotionally sensitive character, and the Princess is beautiful, but her essential beauty is on the inside. Everything is inverted, or at least, not what it first appears. 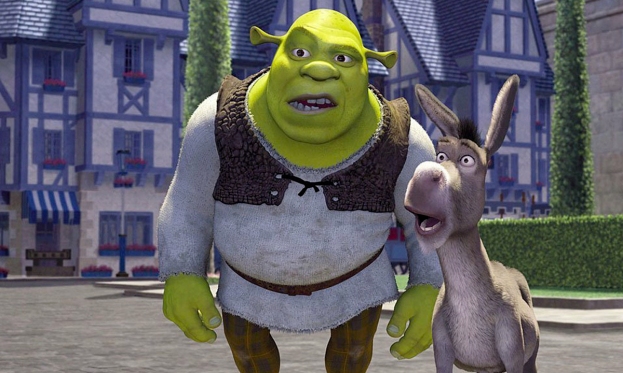 In that sense, this film bears resemblance to the work of the Coens. The film parodies these fairy tales, but it also legitimately adds another layer to them, as well as a layer to the rich history of full length children’s animated films. One of my favorite scenes in this film is when Shrek and donkey first walk into Duloc. The town looks like an abandoned theme park, reminiscent of a Disney park. There’s elevator music, ropes, and an entrance counter. Everything is immaculate; but more importantly, it’s quiet, eerie, empty, and lifeless. A pre-recorded welcome states that the town has rules; little characters who look like the odious Terrance and Phillip from South Park sing about keeping things clean and obeying the rules. The impression is that Duloc is a place where play, inversion, and unexpected surprises aren’t appreciated–in actuality, they’re basically forbidden. The contrast to the rest of the film couldn’t be more stark. Whereas Shrek and Donkey defy expectations and don’t easily fit into any category, Duloc is a cold, sterile place.

One can’t help but see a metaphor in the contrast. Unlike the mid-20th century Disney films that replicate fairy tales of the past, Shrek is a film that sees these characters as growing, evolving, nuanced, and always influenced by the complex cultural matrix of whichever era they are told in. It’s two very different ways of thinking about storytelling, and for that matter, culture. The Shrek way looks at storytelling as something where plots and characters can’t easily be boxed in, where they have, much like Shrek says, layers like an onion.

And in that same vein, this movie has a flagrantly anachronistic soundtrack, but it couldn’t really have been any other way. Shrek’s soundtrack must be anachronistic because the whole point is his story defies categorization. The whole point is that fairy tales can’t be tamed or put in a bottle. They change as the culture changes, and so we get, “All Star” by Smash Mouth, for example, as one of the major songs.

You’ve probably seen Shrek, but if you view it again, consider what it says about stories: that in order for them to have life, they must change, and we must be brave enough to let them change. They belong to all of us, and the moment stories–or anything in culture, really–stops changing, they start to die. That doesn’t mean we can’t also celebrate older ways of telling stories; we can, and we should. But we should also dive into their retelling.

One thought on “Shrek: It’s like a Coen brothers film but without the ruthlessly dark depiction of life and humanity–also Smash Mouth”